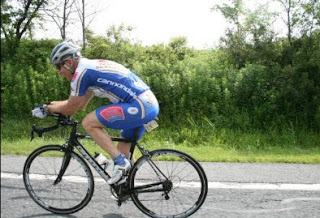 This will be the primary source of information for Rob updates during the actual race, but I just thought I would do an occasional post during spring training.

We've survived another Connecticut winter, warmer spring temperatures are here and Rob's training is going well. (Though today it is only about 34 degrees, so we won't see Rob riding this weekend in the bikini he likes to sport during the warmer months.) He is doing 200 milers consistently (usually on Saturday's) and his weekly mileage is going up steadily.

Travel arrangements for the crew are being booked and logistics are being worked out. (The logistics and preparation, outside of the actual training, are daunting. More on that in a future post.)

Race day for Rob is June 9, 2010. That's when the solo men begin. You can see current entrants, including Rob, here.

In fact, just a reminder of some good sites for information on the race and on Rob:

As we get closer to the start of the race, all of these will see more frequent and regular updates.

One final link that is of particular importance to Rob and his entire crew: This year, Rob will be raising money for the Lance Armstrong Foundation in memory of his biggest fan - his mom Jean - who died last year after her own ultra-marathon battle with lung cancer. Feel free to swing by the page and donate a buck or two or 20, if you are so inclined.
Posted by Bill Baker at 8:00 AM No comments: