A Quick Beginner's Guide to RAW 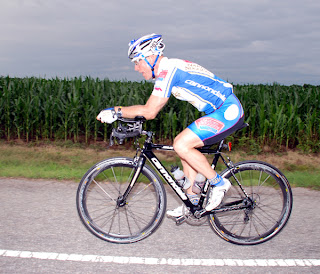 
What is RAW?
The Race Across the West (RAW) is an 860 mile bicycle RACE (not some wussie, leisurely TOUR) from Oceanside, Calif. to Durango, Colo. *

Why does it go from Oceanside to Durango?
It follows the Race Across America (RAAM) course. *

Wait! What is RAAM?
RAAM is a 3,000 mile race from Oceanside to Annapolis, MD, that starts the same day as RAW. *

Why is Rob doing RAW and not RAAM?
Because if RAW is crazy, RAAM is certifiably sociopathic. Oh, and RAAM can take 9-12 days and cost a king's fortune. Since Rob needs a full support crew with him the whole time, and since RAAM can ravage the body physically, Rob thought that RAW would be a more manageable, yet still intensely challenging race for 2012. *

When did he start training for RAW?
When he was about five years old. No, really - he's been training since last fall and has put in thousands of miles including some 300+ mile rides in addition to intense interval training to prepare. **

What is the best way to follow the race?
This blog will provide commentary and play-by-play from the road. Note that the author of this blog will be the night crew navigator, so most of the posts will appear between 7:00PM and 10:00 AM EDT. I might (though not 100% sure) do some tweeting at @RobMorlockRAAM.

For real time tracking, check out this link from Rob's sponsor, www.myathletelive.com. It is a GPS transmitter that is in the pace van that follows Rob the entire way. Keep in mind that it connects via cell phone towers and in some of the places we are going, cell phone service can be sketchy.

For overall standings and positions of racers, click to the RAW web site. *

What if I get hungry while following the race on the web?
We recommended Rob Morlock's title sponsor, Naked Nuggets. Whether you need a quick snack or a full meal, they're yummy and nutritious.*

Which is harder: riding the bike or being on the crew?
Well, I personally have never ridden my bicycle more than about 120 miles in one shot, so I have nothing to compare it to, but I would have to say being on the crew is much more difficult. It's very hard and sometimes, when we have to hand Rob a bottle of water or some food, we have to open the door to the pace van and all the air conditioning goes right out. It's very trying.***

How does the crew work?
There are three crews:
- Day crew (Driver, navigator, chef/mechanic). Follows directly behind Rob, providing everything he needs, including, food, water, navigation instructions, music and scintillating, mature humor.
- Night crew - Same as day crew, except three suckers who Rob likes less, so he stuck us on the graveyard shift. Night crew also provides most of Rob's illumination while he is riding at night.
- Shuttle crew. This is a two man crew that shuttles the day and night crews in and out of the pace van and drives them up the road a couple of hundred miles to a hotel where we can eat and get some sleep before we go back into the pace van.**

Speaking of food, what will Rob eat during the race?
His main source of calories is a liquid called Spiz. Each bottle is a complete meal and about 500 calories and he will consume one of these every hour. He will supplement this with solid food including Naked Nuggets, fruit, and other stuff, depending on his mood and how his stomach feels. He will also drink a lot of water.*

How does he know where to go?
We announce directions over the PA system. Every inch of the race is detailed in a route book. There are intermediate time stations where we have to call race headquarters and let them know that Rob has arrived. *

Are there any hills?
Just a few. The race goes from sea level to western Colorado, which is, you know, in Colorado. Here is the elevation profile. *

What music will he listen to while he is riding?
Mostly light opera, Gregorian chant and Namibian death metal/folk music.***

When will Rob finish?
The race starts on Wednesday, June 13 at noon EDT. Depending on how things go, he will be in Durango sometime Friday evening/Saturday early morning.*

Why does he do this?
He was kicked off the company bowling team when he was a young man and this was how he decided to seek his vengence on a cruel and unforgiving society. **
Posted by Bill Baker at 9:49 PM

Bill...you are already kicking in into high gear and the race hasn't even started yet! Can't wait for Wednesday's start and more bloggin' from the Bake!

Thanks for the info and the soon to be updates Bill. Hey, does this feel like "the old days" being back on travel crew?

Is that Tom G. asking? The truth is, I have no idea. The last time I was in the van for RAAM was 2000. I crewed his 24 hour race in 2002 and, of course, Furnace Creek in 2006 and the 12-hour in 2009. But, this is different. And I have to say, I feel like I might be getting too old for this stuff. Twelve hours in a van overnights, junk food, sleeping in shitty hotels with four other snoring, smelly slobs. All things being equal, I'd rather be in Paris with my wife.

Ask me again on Saturday.

the gang is all here. Tom G...Baker....miss you guys. Good luck Rob and good luck crew!