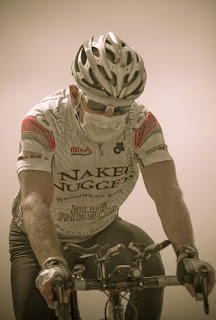 Last night, toward the end of my bike ride, I stopped to visit with my running pals at the Woodbridge Running Group, who were finishing off their Wednesday evening run.

Someone asked me about the Race Across the West - when it started, finished, etc. When I said that it started on Wednesday, June 13 and that Rob would probably finish Friday, June 15, someone else said: "That's impossible! How can anyone ride almost 900 miles in two days???"

When I replied that it was not only possible, but highly likely, she said: "That's insane!"

Taken out of context, she would be absolutely correct: who could possibly ride that far, that fast? But in the context of Rob Morlock and ultra-distance cycling, it makes complete sense.

So, make no mistake: RAW is a loooong race. But by Rob standards, it's right in his wheelhouse. By all accounts, when he reached Durango (the finish for RAW) during the 2010 RAAM (both races follow the same course), he was still fresh as a daisy and feeling great. Of course, there are a lot of factors at play in a race such as this including wind, weather, health and a million other little things, but if past is prelude, Rob should do very well at this distance. It'll be over before he has a chance to get tired!

So, yes - 860 miles in two-plus days would be insane for you or me, but for ultra-guys like Rob, it's a mad dash across the western third of the U.S., followed by a weekend in Durango with buddies and beer.

For Rob, that's about as sane as this sport gets.
Posted by Bill Baker at 6:49 PM