Journalism 101 says never bury the lead, so I won't: Rob had to withdraw from the race after riding 484 miles in about 31 hours.

The reason is nerve damage in his hand. This has been a recurring problem for Rob since his first RAAM in 1996. Over the years, after each of his five RAAM starts and three finishes, as well as some of the 500+ mile races, it would get a little worse and take longer to heal. After his seventh place finish in RAAM 2010, he had such serious nerve damage in his hand that he had to have surgery. It took almost a year to recover.

Heading into this race, it was on his mind and, sure enough, he started feeling the telltale symptoms this morning. It is caused by a combination of things: road vibration, constant gear shifting and the weight he puts on his hands, forearms and elbows, depending on riding position. Today, it got progressively worse through the day and right after night crew came on shift, we went through the Cottonwood time station and Rob pulled over. He told us what was happening and we talked over the pros and cons of continuing for almost two hours. Rob also consulted by phone with Kate as well as day crew and we all agreed that his longterm health and ability to continue serving as a police officer (who needs two functioning hands to carry out his duties) far outweighed the need to continue to Durango.

While this is an immensely difficult decision, it is an entirely unselfish one and it does not diminish how great Rob did over the past two days. I can count all the people I know who can ride a bike like Rob on one finger. We had a great time out there and every one of us would crew for Rob again in a second. All he has to do is ask.

I don't think he will, though. This will not be the end of his riding a bike, but it is likely the end of his ultra-distance racing. After 18 years and - literally - tens of thousands of miles, it may finally be out of his system.

He appreciates all the comments and support. If you happen to be out for a bike ride and Rob rides up next to you, feel free to ask him all about all his races and his wins. Just make sure you pick up your pace or it will be a very short conversation. He's that fast.
Posted by Bill Baker at 2:12 AM 4 comments:

Insane climb out of Prescott 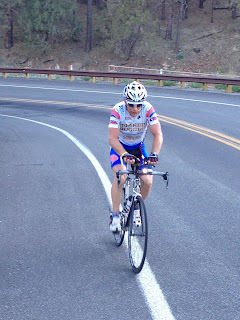 Rob woke me up with a phone call. He's having a few minor medical issues and wanted to talk through them.

He's back on the bike and rode up Yarnell like he had five miles in his legs. We just saw him at the Prescott time station and as he rode by me, I shouted "WTF???"

He just shrugged, smiled and kept on riding. Hammer-boy.

We're going to prepare for transition, chat more with Rob and have a better update shortly.
Posted by Bill Baker at 7:56 PM No comments:

Worth mentioning before I pass out for the day...

2.) I can't over-emphasize how hard today is going up Yarnell grade into Prescott, AZ. Rob has done this many times and he's a mountain goat, but he does not take this climb lightly. And his reward for doing it successfully? Tonight, he gets to ride from Sedona to Flagstaff: 40 miles of some the steepest roads and harrowing switchbacks I have ever seen anywhere.

3.) When will he sleep? Who knows. At this point, I won't say anything about it here, as every single other RAW racer has a crew with Internet in their support vehicles and I'm not anxious to tip any of them off.

This likely be my last post until after I wake up. Don't forget you can track him in real time at myathletelive.com. Cell service is pretty good here, so it should be a good connection all day. Also don't forget that the GPS transmitter is on the roof of the pace van, which must leap frog all day today. That means short bursts of 50 mph, followed by zero mph.

All the while, Rob is pedaling.
Posted by Bill Baker at 11:47 AM No comments: 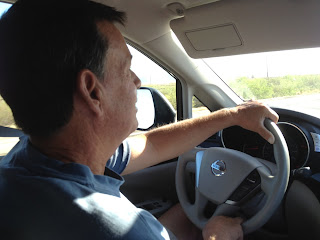 In the shuttle van heading to Sedona to sleep 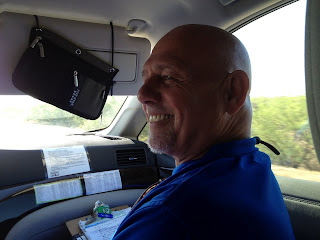 Shuttle crew navigator Tom W.
Posted by Bill Baker at 10:36 AM No comments:

We are about 12 miles out of TS 5 in Salome. It's been a gentle but steady uphill for the last 50 miles, so Rob's pace has slowed a bit.

The sun is up and he says he feels good, if a bit logy. I told him it was because we were going uphill. It looks like he will end up doing about 230 miles during our overnight shift, which is, by all measures, super-neeto.

He just had some regular, caffeinated cola to perk him up a bit and his pace looks great.

We will be transitioning out of the pace van for day crew in about an hour. They will have to leap frog all day, since close-follow is not allowed in Arizona between 7:00 AM - 7:00PM local time.

We will head up the road about 200 miles with the shuttle crew, grab some breakfast, find a hotel and get about 5-6 hours of sleep.

I actually brought my running shorts, harboring the delusion that I might sneak in a run. HA!

But not for Rob. Not yet. He has some more pedaling to do. In 100 degree heat. Uphill. The hardest part of RAW is about to unfold.
Posted by Bill Baker at 8:50 AM No comments: 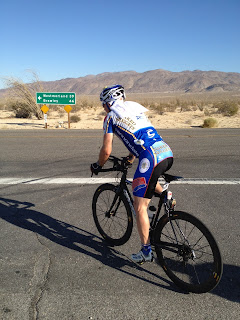 Posted by Bill Baker at 7:17 AM No comments:

Rob went through TS 4 in Parker, AZ, at 5:48 AM EDT. He's about 100 yards behind Gerhardt Gulewizc, who is one of the favorites to win RAAM.

As far as RAW is concerned, only two racers have come through TS 4 - Danny Wyss and Rob. Keep in mind that Wyss is a former RAAM winner and definitely a pre-race RAW favorite.

Rob had some stomach distress about 100 miles back, but we diluted his Spiz a bit, gave him some Coke and he is feeling great.

Right now we're on a slight uphill and he's doing about 19 mph. After 286 miles of racing.

The sun will be coming up in about 2.5 hours, which is always good for a mental boost, not that he needs it. He's riding like a champ.
Posted by Bill Baker at 6:05 AM No comments:

http://www.raceacrossamerica.org/raam/rcrank.php?s_N_category_group=1&s_N_Race_ID=3&s_N_Year_ID=36
Posted by Bill Baker at 3:28 AM No comments:

We're about 12 miles shy of time station 3 in Blythe, CA. It's great that Rob is coming through here in the dead of night, since it is expected to be about 110 degrees during the day on Thursday.

He is just motoring along at a great clip. We're in a B-52s music set right now that is driving our mechanic, young Joe, nuts. This is golden oldies music to a 20-year-old.

We sort of screwed up when we transitioned into the pace van and forget to pack any kind of food that resembles... food. For dinner, I had a bag of Sun Chips, with a bag of Lay's BLT potato chips for dessert, all washed down with Diet Pepsi. My kingdom for some Naked Nuggets. LIVIN' THE DREAM!!!

Only seven more hours to go until day crew relieves us.

*A note about this blog: I am typing this on a small keyboard, attached to my iPad, sitting on my lap, in a moving car in the middle of the night, on less sleep than is considered medically ideal, all while being constantly interrupted by Rob for all his whiny, bullsh*t needs like food, water and medicines. So, please forgive the occasional tupo, er, typo.
Posted by Bill Baker at 2:51 AM No comments: 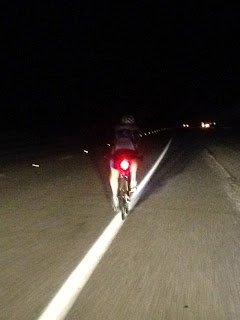 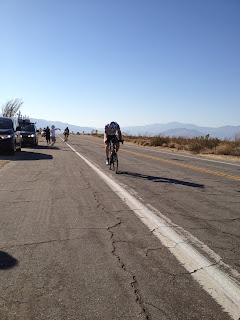 We just went through Time Station 2 in Brawley, CA. Rob (and all the racers) have been enjoying a huge tailwind. Rob said in 2010 he came through here after dark and today we came through about 90 minutes before sunset. He feels great and is ready for a fast night on the bike.

It's almost pitch black now and we are heading into some serious desert, so it will be dark.

Nighttime is very different from the day and I know Rob really enjoys the "atmosphere." The music, the miles. He loves every bit of it.
Posted by Bill Baker at 11:21 PM No comments:

NIGHT CREW IS IN THE HOUSE!

AND READY FOR A NAP!
Posted by Bill Baker at 9:36 PM No comments:

Just saw Rob for the first time since the start. We are at approx. 90 mile mark. It's 110 degrees and Rob blasted through at about 30 mph with a massive smile on his face.

Night crew goes on shift in about 45 minutes and we will leap frog for another hour before beginning close follow. (Leap frog is where the pace fan is NOT allowed to follow directly behind the racer due to traffic and safety reasons.)

Once we begin close follow, we will crank up the Captain & Tennile and Bieber and settle in for a rockin' night!
Posted by Bill Baker at 8:19 PM 1 comment: 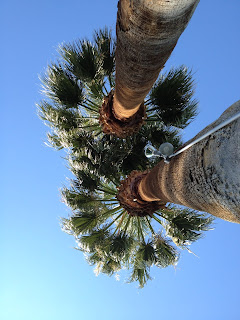 ...waiting for Rob to come through Borrego Springs, CA.
Posted by Bill Baker at 7:23 PM No comments:

The Race is On!

Rob started at precisely 12:12 PM local time. It will be a leisurely "parade" start for the first 23 miles or so and then he will meet up with day crew in the pace van.

Night crew is now sitting next to the ocean eating Mexican before we head up the road 100 miles to meet Rob for night shift.

Rob was feeling great, but hungry and antsy. While we were standing there waiting to start, he consumed 1,000 calories in about 30 minutes and then said "I'm still hungry."

This is because he has been tapering for the past 10 days, but his body is in perfect condition for long-distance cycling and he's a calorie burning machine. He will consume about 10,000-13,000 calories a day for the next three days, mostly in liquid form via Spiz. Each crew member will consume about the same number of calories, but in the form of Big Macs and Cheetos.

Rob also said that he did an easy 50 mile ride yesterday and he felt like Superman. He said he was humming along at 26 mph and "...it was effortless." 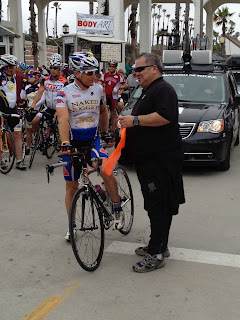 Posted by Bill Baker at 3:19 PM No comments: