Spoke to Rob a few minutes ago. Yesterday was a rough day. The heat took its toll on him and his crew was concerned about his vital signs.

Crew member Sal Dicello is an EMT and is keeping a close eye on Rob, including fluid intake and vital signs. Rob was riding this morning after an extended (five hour) sleep break. He said he is now feeling good as he heads toward Durango, CO. He had a full breakfast and his appetite is great.

Last week, Rob was keenly aware that his Connecticut body was not 100 percent acclimated to the desert heat heading into this race. It has been a cool spring here in Connecticut and that caused some concern. But he has a spectacularly competent and trained crew who can administer IV fluids and other medical attention as needed. This should keep Rob riding and help him get his strength back.

Also, Rob being the detail man that he is (and anyone reading this who knows him, knows what I am talking about), is concerned about the broken pace van back in Cortez. I told him not to worry about that and that we were taking care of it and that he just needed to ride.

So that's what he is doing. Good man. 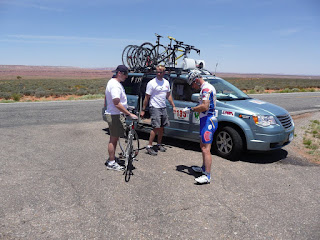 Rob: "John - YOU ride it."
John Browne: "I'm not going to ride it! Give it to Mikey! He'll ride anything!"
Mikey Perron: "Sorry, Rob. I'll be trying to fix the transmission on this fine Chrysler product in about five hours."